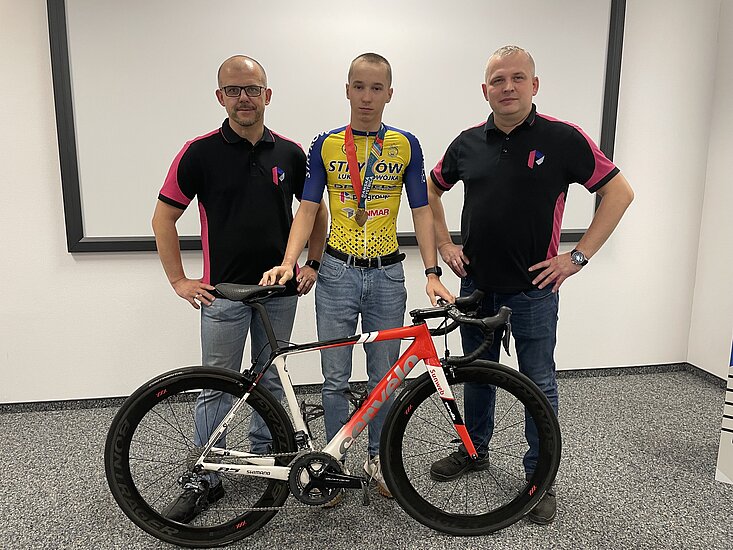 The chairman of the cycling club visited Progroup’s corrugated board plant in person along with the exceptionally talented cyclist Michał Strzelecki. This year, the 16-year-old’s achievements included winning the bronze medal for the Polish national team at the European Youth Olympics Festival held in Banská Bystrica, Slovenia.

“Our long-standing link with LUKS Dwójki Stryków is a shining example of a successful partnership. We’ve been impressed by the sporting successes that Michał has achieved thanks to his talent and the support from the club. We’re delighted that as part of our cooperation we have actively contributed to this,” says Krzysztof Kosiorek, operations manager at PW07.

Club president Walczewski really values the close cooperation: “We’re very grateful for Progroup’s long-standing commitment. The company's donation allows us to continue recruiting and supporting our next generation of cyclists.” Specifically, the cycling club will use the donation to help finance sports equipment and a new club car.

With sites in six countries in Central Europe, Progroup is part of many communities. As a good neighbour, the family-run company gets involved in public life and, among other things, it enjoys long-standing cooperations with local and regional clubs and associations.

About Progroup
Progroup AG, located in Landau, Germany, is one of the leading manufacturers of containerboard and corrugated board in Europe. Since it was founded in 1991 in Offenbach/Queich, the company has been pursuing a consistent growth strategy which, in addition to technological leadership, is also based on the use of innovative and environmentally friendly production technologies. Progroup operates production sites in six countries in Central Europe. These currently include three paper factories, twelve corrugated sheetfeeder plants, a logistics company and an RDF power plant. With 1,554 employees, the company generated sales of around 1.3 billion euros in 2021.