Business Medal of the State of Rhineland-Palatinate: Ceremony of the SÜW district for Progroup founder Jürgen Heindl

Landau, 20 September 2021 – Back in May 2021, Progroup founder and CEO Jürgen Heindl was presented by Dr. Volker Wissing, State Minister of Economic Affairs, Transport, Agriculture and Viticulture, with the Business Medal of the State of Rhineland-Palatinate in recognition of his outstanding work as an entrepreneur. The coronavirus regulations that were in force meant that the ceremony took place with only a very small number of people present. Dietmar Seefeldt (administrator for the Südliche Weinstraße district) and Thomas Hirsch (mayor of the town of Landau) have now invited people to come to a ceremony to mark this special honour at the Südliche Weinstraße district hall. 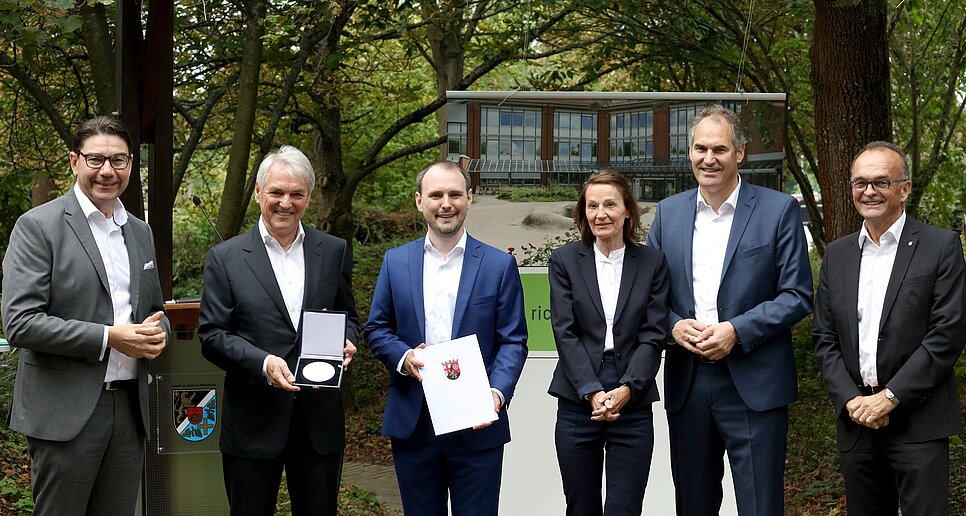 It was in 1992 that Heindl started Progroup’s corrugated board production facility in Offenbach a. d. Queich. The family company has successfully pursued its ambitious growth strategy ever since. Today Progroup operates three paper factories, eleven corrugated sheetfeeder plants, a logistics company and a combined heat and power plant in six countries in Central Europe.

“Jürgen Heindl has given outstanding service to the economy across the Southern Palatinate region. He is the shining example of our innovative SMEs and shows that a sustainable future is being created in Rhineland-Palatinate. As the district administrator for the Südliche Weinstraße region, I am particularly proud that Progroup’s European success story started here with us in the Palatinate,” says administrator Dietmar Seefeldt.

Enduring commitment to the Southern Palatinate region
Jürgen Heindl feels a strong bond with the state and the region around Landau and Offenbach a. d. Queich: “This is where the Progroup story began and our journey ‘from the Palatinate region out into the world’. Even though we are expanding our plants throughout Europe, it is still very important to us to provide a boost to our home region.”

In 2019, the company along with its customer K2 invested around 17 million euros in modernising the site in Offenbach and in doing so signified that it has an enduring commitment to the region. In 2020, Group Office in Landau was expanded for the second time. By expanding the office, the company created space for 250 highly skilled jobs here.

Growth story continues
At the end of August 2021, Progroup announced the construction of another corrugated sheetfeeder plant between Petersberg and Höheischweiler. The company is investing more than 90 million euros in this new factory building. “By making this investment, we want to do our bit to develop the Palatinate economy and thus also give something back to the region,” says Heindl.

With production scheduled to begin in the second quarter of 2023, 60 new jobs for highly skilled employees and apprentices will be created. “During the development planning process, we received a lot of support from the local authority in Thaleischweiler/Wallhalben and the two communities of Petersberg and Höheischweiler; we are very grateful for this,” says the company’s founder in stressing the unwavering support from the local politicians.

In addition, further growth projects in France and Italy are in the final planning stage. The level of investment in the current national and international expansion projects is around 300 million euros. A total of around 200 new, highly skilled jobs are being created in Germany and abroad. “These increases in capacity will enable us to continue to offer our customers the high reliability of supply and product quality they are used to and grow together with them on an equal footing,” says Jürgen Heindl in emphasising the importance of his long-term growth strategy.

Good neighbour: Progroup committed to the region
As well as his achievements in business, Jürgen Heindl is also committed to social causes in the region. He gets involved by ensuring that Progroup supports projects which promote children and young people in particular. This may be in education but also in sport, or may involve specifically supporting disadvantaged children and young people.