Landau, 20 April 2021 – Progroup is committed to the education and training of children and young people. The successful manufacturer of containerboard and corrugated board sheets is supporting, as premium sponsor, the club Team Bananenflanke Südpfalz (e.V.). This is an innovative football project specifically for children with a mental handicap. At Progroup’s site in Landau, Maximilian Heindl, Chief Development Officer and member of the Board of Progroup, and Stefan Schmitzer, Chairman of the club, have now signed the agreement. 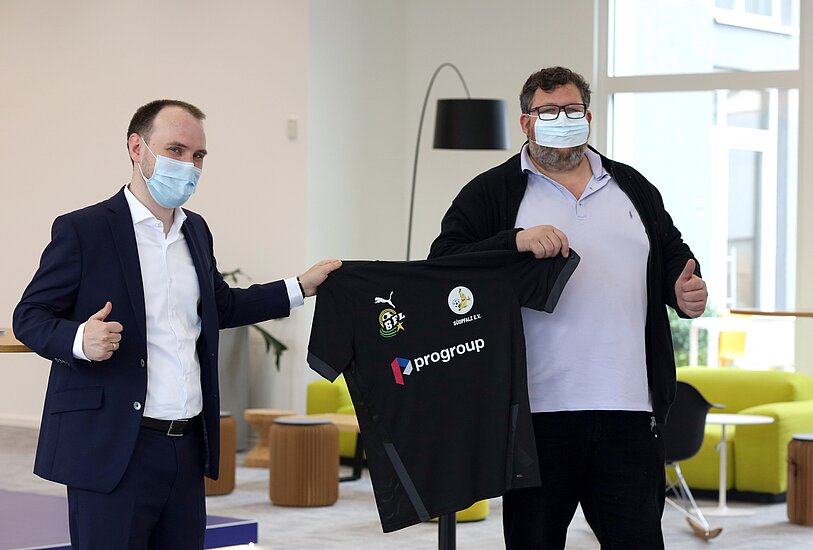 Maximilian Heindl, Chief Development Officer and member of the Progroup Executive Board, and Stefan Schmitzer, Chairman of the Team Bananenflanke Südpfalz e.V. association, are pleased with the new jerseys for the "Progroup Black Bananas." team (from left to right). Photo: Progroup

“Football provides a wonderful opportunity to learn and embrace positive qualities such as team spirit, ambition or even simply the joy of physical exercise. The enthusiasm and enjoyment that the children and young adults display when playing football prompted us to volunteer to provide sponsorship for Team Bananenflanke Südpfalz e.V.,” said Maximilian Heindl, Chief Development Officer and member of the Board of Progroup, during the signing of the sponsorship agreement.

Stefan Schmitzer, Chairman of the club Team Bananenflanke Südpfalz e.V., added: “We are very grateful for this financial support. The club Team Bananenflanke Südpfalz e.V. looks after and trains a total of 50 children and young adults at the ground of Fortuna Billigheim and in Herxheim at the St. Paulus Stift facility. Club trainers and coaches from various football clubs work to support our four teams. Training and looking after these four teams is a really wonderful thing to do.”

One of the four teams will now feature the company in its name: The Progroup Black Bananas.The players in the Progroup Black Bananas team are between 10 and 25 years of age. The highlights of the club’s sporting year are three tournaments which are referred to as “matchdays”. This is when the players of the individual teams compete against each other several times. The date for the next matchday has not yet been decided. It will be announced among other places on the club’s Facebook page at facebook.com/BananenflankeSuedpfalz. As part of the sponsorship, it will be known as the Progroup matchday.