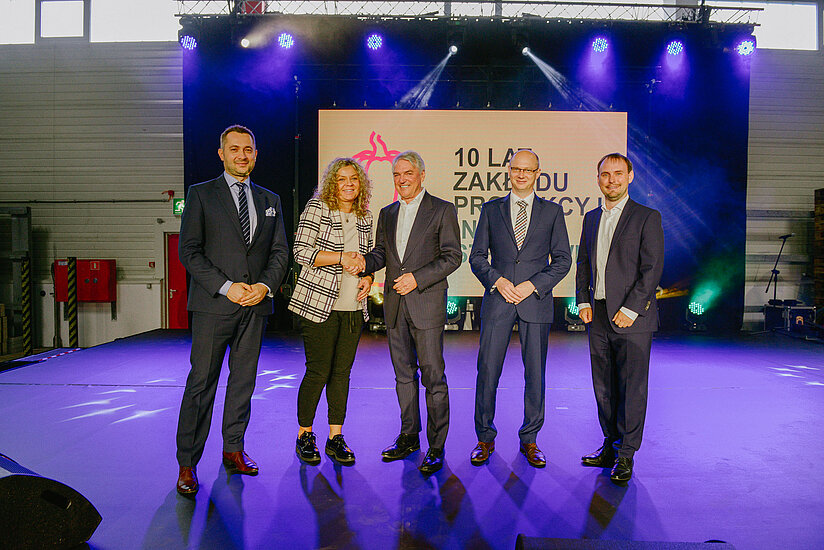 Progroup AG, which is based in Landau in the German state of Rhineland-Palatinate, is pursuing ambitious growth targets with its ‘Two Twentyfive’ strategy. As part of the celebrations to mark the tenth anniversary of the corrugated sheetboard plant, the plan to construct a further, larger and even more efficient plant in Stryków was announced. This will make Poland a vital hub for the growth programme of the company, which has two plants in the country, one in Stryków and one in Trzcinica. Together with a new plant in Stryków, the total capacity would increase to 520,000 tonnes per year, making Poland one of Progroup’s most important locations for production in Central Europe.

The new corrugated sheetboard plant covering a basic footprint of around 27,900 square metres is set to be constructed on the existing plot with a size of around 229,000 square metres very close to the existing plant. The level of investment will be around 75 million euros, making it one of the biggest investments in the region. “We are delighted to be able to announce this major decision as an important piece of news during our anniversary celebration. Our investment is set to create more than 50 new jobs and training positions. Our new plant will also be noted for its sustainable production, state-of-the-art working environment and numerous technical innovations. As a family-run company, it is important to us to think and act sustainably with a fundamental focus on the long term,” stressed Jürgen Heindl, Chief Executive Officer and founder of Progroup AG.

Witold Kosmowski, Mayor of Stryków, passed on the town’s congratulations on the tenth anniversary, welcomed the company’s new investment decision as another boost for regional development and declared that he would be absolutely delighted to receive an invitation to officially open the new corrugated sheetboard plant in 2021.

Dorota Lombardi, Director of Economic Development for the Lodz region, reflected on the business decision, which was a bold one at the time, to construct a new plant in the special economic zone that was just being created. In addition, she praised the exemplary role that the company has played when it comes to environmental protection and sustainability and wished it good luck with the new project that is set to herald the start of another new chapter in Poland.

The new corrugated sheetboard plant will satisfy all the requirements for modern workplaces in production. Efficient filter systems will create a largely dust-free working environment and an innovative sound insulation system will produce a noticeable reduction in noise pollution. This means it will no longer be necessary to wear personal protective equipment.

The technology which is envisaged for the new plant in Stryków is exceptionally innovative. Innovations include the one-man dry-end concept, a highly efficient high-bay warehouse with 15,000 storage spaces and four automatic storage and retrieval machines, and an IT-controlled flow of finished goods using electric stacker trucks. In the final expansion stage, the production facility will have the highest level of automation in the industry.

In keeping with Progroup’s Green Hightech philosophy, in many areas the new plant surpasses the high requirements that need to be met to obtain a licence to operate such plants. These include a CHP plant (combined heat and power) which will supply the plant with power, heat and cold. The waste heat from power generation will be utilised either directly for heating purposes or for cooling using the absorption process, which considerably reduces CO2 emissions.

But Progroup not only saves plenty of greenhouse gases in the production processes; top scores are also achieved in the product range. The Next Fibre® papers and Next Board® corrugated boards are renowned for much lower use of energy and raw materials.