+++ State funding to improve the economic structure of the region
+++ Boost to home region: Long-term growth of the company in Rhineland-Palatinate
+++ 90 million euro investment in construction of a new, highly automated corrugated sheetfeeder plant in Pirmasens; 67 new jobs

Landau / Offenbach a.d.Q., 18 February 2022 – The Economics Minister of the State of Rhineland-Palatinate, Daniela Schmitt, made her first visit to Progroup in Offenbach an der Queich. She took the opportunity to gain a personal impression of the economic strength of this family-run company. This is because Progroup continues to invest for the long term in a new, additional corrugated sheetfeeder plant in its home region of Southern Palatinate. This investment project has been supported by the State of Rhineland-Palatinate pledging around two million euros to help fund the company’s new corrugated sheetfeeder plant. It is currently being constructed near Pirmasens. 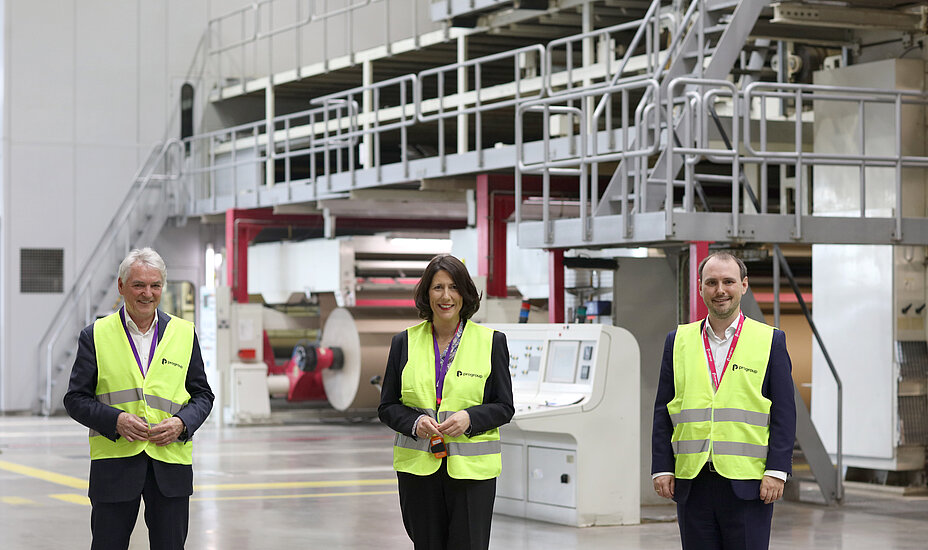 Minister of Economics of the State of Rhineland-Palatinate, Daniela Schmitt (center) with Progroup board members Jürgen Heindl (l.) and Maximilian Heindl (r.)

“Rhineland-Palatinate is our home. With our next corrugated sheetfeeder plant, we are expanding where our roots are,” says Jürgen Heindl in emphasising the company's regional ties. We thank the State of Rhineland-Palatinate for supporting our investment in Pirmasens. This shows once again that the people here share our philosophy that big aims can only be achieved by working together with the passion that is needed.”

“Progroup is an important employer in the region. The company is an example of our state’s innovative SMEs that are also successful internationally. I am particularly delighted that with its latest growth project Progroup is delivering another boost to its home region,” says Economics Minister Daniela Schmitt.

New high-tech corrugated sheetfeeder plant in South-West Palatinate
The PW15 corrugated sheetfeeder plant is currently being constructed near the villages of Petersberg and Höheischweiler. The modern production facility will be constructed right next to the plant of the packaging manufacturer G&G Preißer. From the second quarter of 2023, the plan is for up to 500 million square metres of corrugated board sheets to be produced each year. 67 new jobs for highly skilled employees and apprentices are set to be created at the plant, which will cover around 28,000 square metres. The company is investing more than 90 million euros in the new building and is thus consistently pursuing its growth strategy. The company is thus not only strengthening Rhineland-Palatinate as a business location, but at the same time is expanding its market position in northern France and southern Germany.

Enduring ties to Rhineland-Palatinate as a location
The family-run company, which operates internationally, is clearly committed to Rhineland-Palatinate as a location. This was where the company started its first corrugated sheetfeeder plant (PW01) back in 1992. PW01 was replaced by the state-of-the-art PW06 plant in 2007. In 2019, Progroup along with its customer K2 invested another 17 million euros in modernising the site and in doing so signified that it has an enduring commitment to the region.