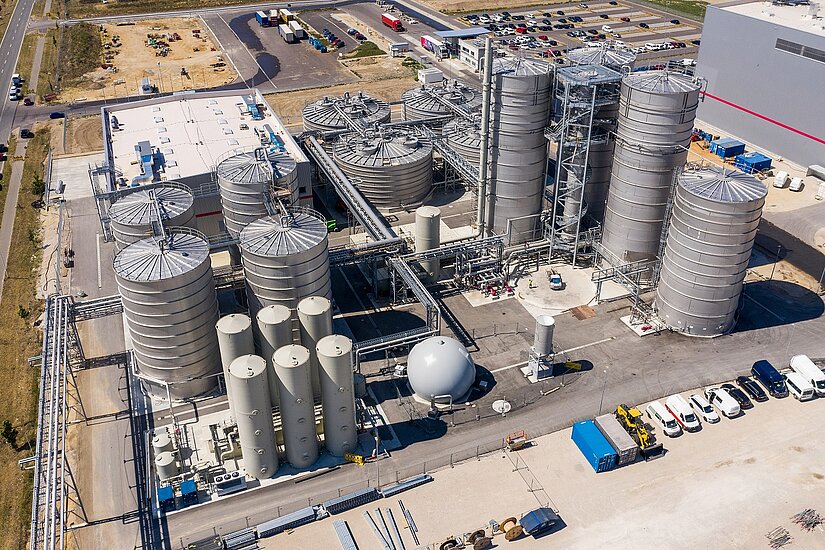 “Sustainability is a core element of the philosophy that we have pursued for 28 years. It is therefore obvious for us to act in a way that is environmentally friendly and conserves resources and seek to improve all the time,” stresses Maximilian Heindl, Chief Development Officer and member of Progroup’s Executive Board.

Since the introduction of the energy and environmental management systems according to ISO 50001:2018 and ISO 14001:2015, Progroup has constantly invested in making technical improvements to PM1, which is now 20 years old. Last year, thanks to the recent conversion of the heat transfer system, the heat consumption was reduced compared to the previous year by 23,000,000 kWh of heat, or a good five per cent.

Switching over to more efficient drive systems reduced the consumption of electrical energy by 1,564,000 KWh a year. At the same time, productivity rose, which also benefits the energy footprint.

Moreover, a company waste guide was created as a reference for the employees to consult. It provides an overview of the sustainable waste disposal system at PM1 and includes practical tips for thorough waste separation.

For the current year, the team at PM1 has set itself the goal of further optimising the water circuit and saving on additives. The paper factory does not produce any waste water because it has had a completely self-contained water circuit since it started operating. The used water is purified by fibre fragments and then fed back into the production process.

With the EMAS certification, the PM3 paper factory, which started operating last year, has successfully attained its vital environmental goal - commissioning the integrated circulating water treatment plant. The plant reduces the amount of fresh water that needs to be used by around 80 per cent compared to similar paper factories. The process water is biologically purified and then reused in production. This means that around 3,750,000 cubic metres of fresh water are saved each year.

All of the process water required for paper production is prepared in an energy-saving and resource-efficient way. The fact that all the process water is recycled means that no “paper waste water” is produced at PM3.
What is more, the circulating water treatment plant is designed for a hydraulic throughput of 8 litres per kg of paper produced and to handle the entire water circuit each day. This means it is possible to keep the level of contamination in the process water on the paper machine at a constantly low level with a chemical oxygen demand (COD) of < 6,000 mg/l.

The organic components in the process water are turned into biogas in a fully encapsulated purification process. The biogas is carefully treated and used as a natural gas substitute for producing steam. This produces an annual saving of around 62,000,000 kWh or around 10 per cent of the required natural gas.

Progroup has been operating at PM1 with the energy management system according to ISO 50001:2018 since 2013 and also with the widely established environmental management system (EMS) according to ISO 14001:2015 since 2018. Progroup is thus pledging to constantly reduce further the amount of energy and raw materials it uses and save precious resources such as fresh water.

The respective certificate is awarded by an independent accredited certification body. The annual review of each site establishes whether the environmental targets which were defined during the previous review have been achieved. Recertification, during which the organisation and target attainment are examined particularly thoroughly, takes place every three years.

The EMAS certification that is implemented at PM3 is a scheme that has been developed by the European Union for companies that want to improve their environmental performance. By participating in the scheme, Progroup is pledging to reduce its energy consumption, save valuable resources such as water and minimise residues (waste materials).

As part of a public statement, Progroup provides information annually about relevant environmental protection measures and also has itself reviewed by independent, government-accredited auditors. An extensive recertification audit is also conducted together with an accredited auditor every three years.

Progroup AG, located in Landau in the German state of Rhineland-Palatinate, Germany, is one of the leading manufacturers of containerboard and corrugated board in Europe. Since it was founded in 1991 in Offenbach/Queich, the company has been pursuing a consistent growth strategy which, in addition to technological leadership, is also based on the use of innovative and environmentally friendly production technologies. Progroup operates production sites in six countries in Central Europe. These currently include three paper factories, eleven corrugated sheetfeeder plants, a logistics company and an RDF power station. With 1,455 employees, the company generated sales of around 881 million euros in 2020.