A tear in the eye 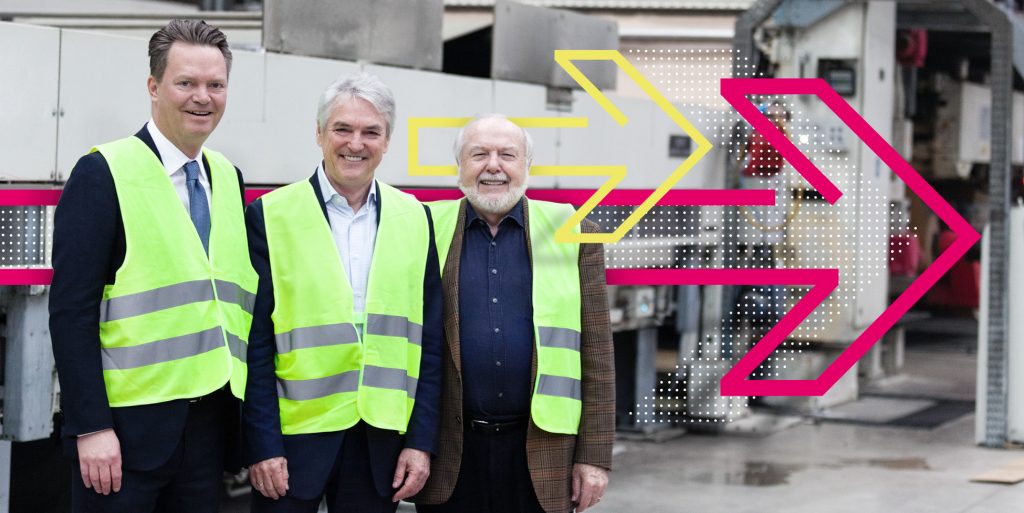 “There is definitely a hint of wistful nostalgia.” Jürgen Heindl, the company founder and CEO of Progroup, had to pause briefly and take a deep breath. It was no wonder because 29 January 2019 was a special day in the company’s history. And this was not just because it was Jürgen Heindl‘s birthday. He was standing, with a microphone in his hand, on the bridge of the control room in the old corrugated sheetboard plant in Ellesmere Port. Here in England, very close to the city of Liverpool, he ceremoniously decommissioned the PW08 plant with a symbolic press of a button. It was exactly ten years to the day since it started operating in the United Kingdom. But this was not all: PW08 featured the same corrugator machine that started operating 27 years previously as PW01 in Offenbach, thus heralding the start of Progroup’s dynamic success story. A machine that was much more than just that.

“It is a really emotional moment,” continued Jürgen Heindl in his speech to the assembled workforce at the plant and invited guests, “but time marches on.” The machine had manufactured products for a total of 25 long years. This was only interrupted by a break in 2007/2008 during which it was disassembled in Offenbach, shipped to England and reassembled and put into operation there. During its useful life in service, it delivered a gigantic output of 3.5 billion square metres of corrugated board – which is equivalent to a strip of corrugated board one metre wide stretching a whole nine times from the Earth to the Moon.

Marco Wollenburg was the first shift supervisor on this very first machine in Offenbach in 1992. On this day he joined forces with Heindl to press the Off switch and said in view of the vast production output: “It’s a shame really that we’re having to shut it down.” He had to smile, and so did the others, including Marc Weigel. He was not only one of the longest-serving Progroup employees, but in particular he played the leading role in overseeing the relocation of PW01 and its recommissioning as PW08 in England. He admitted that today was an emotional moment for him too: “But it is great to see how well the machine has continued to run for the last ten years.” And ultimately this was down not least to Audrius Jasmontas, who was the fourth person in the group to place his hand on the Off switch. At the time, he was the first shift supervisor for the newly installed PW08 here in Ellesmere Port.

The four men – Heindl, Wollenburg, Weigel and Jasmontas – pressed the switch that was placed in front of them on the railing of the control station – and this moment heralded the end of PW01 and PW08. There was rousing applause from the employees and guests which then slowly faded away in the sprawling production hall. Elements of the machine are now set to be put on display at the company’s plant site in Offenbach to serve as a reminder of how the company’s history all began. This was important to Jürgen Heindl.

The retired machine once also represented the first milestone in the working relationship with the machine builder BHS Corrugated. Lars Engel, BHS Managing Director, got to the heart of the matter in his short address: “This machine is the mother of three success stories: It formed the basis for the success of the company, it set new technical benchmarks and finally it is a symbol of the long, close partnership between BHS and Progroup.” It therefore symbolises the Power of Cooperation that Progroup champions, added Jürgen Heindl, extending his right hand to Lars Engel for a long handshake.

But for all the nostalgia, the focus is now very much on the future. For at the same time a new chapter is being opened in Ellesmere Port. With PW12, Progroup recently started operating the world’s most efficient and most productive corrugator machine of its type. This was more than good reason also to celebrate on this day – despite having a tear in the eye, as Jürgen Heindl put it. The workforce and the guests enjoyed tucking in to the buffet which was laid on to celebrate the day and not least to celebrate their own achievements that were accomplished with the machine.